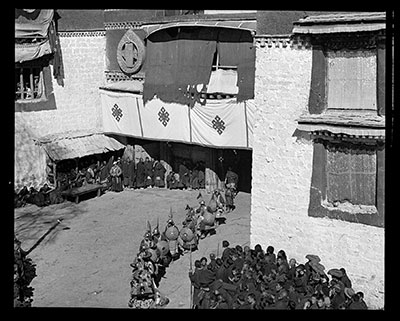 The Nechung Oracles's khor procession leaving the Jokhang at the time of the Monlam Torgya. These novice monks act as a retinue to escort the Nechung oracle away from the temple. There are different sections to the retinue. Here it is possible to see monks dressed in the ritual costume of black hat (zhva nag) dancers in front of those dressed in ancient armour and carrying lances. Monks and officials can be seen lining the inner courtyard of the Jokhang as well as watching the procession from the upstairs window.