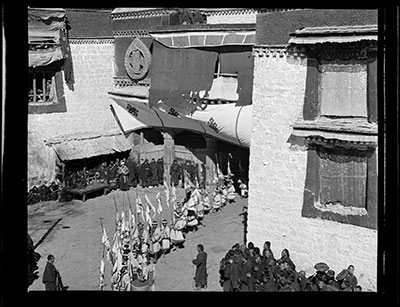 Procession of novice monks from Nechung monastery (gnas chung) known as 'khor, leaving the Jokhang Temple in the centre of Lhasa at the time of the Monlam Torgya. These novice monks act as a retinue to escort the Nechung oracle away from the temple. They can be seen wearing ceremonial dress and carrying standards. Monks and officials can be seen lining the inner courtyard of the Jokhang as well as watching the procession from the upstairs window. The Nechung Oracle was the state oracle of Tibet and the Jokhang was one of the most important religious sites in the country.