Monks in ceremonial dress with drums at Jokhang, Lhasa 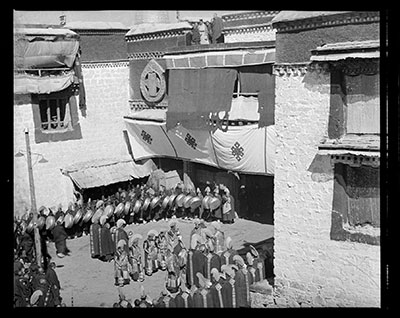 A long line of monks in the Jokhang Temple at Lhasa. They are wearing ceremonial dress and hold drums (rnga). Three monks in the centre of the courtyard are carrying cymbals. The monks are waiting for the torma or votive offering procession, which takes place as part of the New Year ceremonies each year. The central courtyard of the Jokhang Temple can be seen, with the large yaks wool curtain over the central balcony. Many photographers found this a difficult location in which to take photographs because the courtyard is a relatively enclosed space. Some officials can also be seen at the upstairs window on the left of the image as well as on the roof above the central balcony