The Torma at Lugong Gyalpo outside the Jokhang 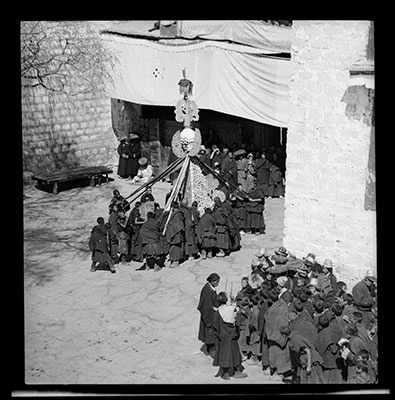 Monks bringing out a Torma (gtor ma), in which all evil inflences are stored, from the Jokhang during the Lugong gyalpo (glud 'gong rgyal po) ceremony held on the twenty ninth day of the second Tibetan month. The Torma is a pyramidal structure with fretwork wings surmounted by a grinning skull mask with a spear and a small umbrella on top. There is a crowd of onlookers on the the right hand side.

Research publication - Hugh E. Richardson, Ceremonies of the Lhasa Year , 1993, London: Serindia Publications, p. 68. 'The torma'. [This image is used to illustrate the taking of the torma from the Jokhang to the place where it is destroyed during the ceremony of the 'Demon-Ransom King' (glud 'gong rgyal po) which took place on the 29th day of the second month. This is confimed by the caption written on the reverse of the print of this negative (2001.59.1.54.2), 'The Torma at the Lugong ceremony'. Richardson may not have had a good photograph of the Torma taken at the time of the Monlam Torgya so used this one taken during the Lugong gyalpo, instead. [KC 24/7/2006]