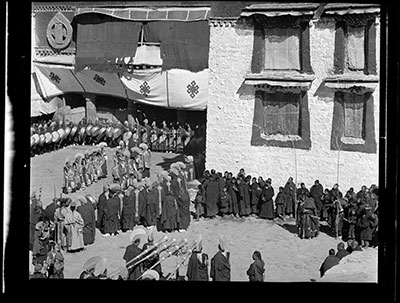 Monks from the Namgye Tratsang monastery in the Potala palace in ceremonial dress at the Monlam Torgyap ceremony in front of the main entrance to the Jokhang. They are wearing brocade waistcoats, long pleated cloaks (gober) and a pendant on the back (gyabdar). Those forming the outside circle are all holding hand drums; those in the centre are holding censors. At the bottom of the picture there are four monks blowing into their long horns supported on a frame held by two other monks. There are police monks holding long branches on the right.