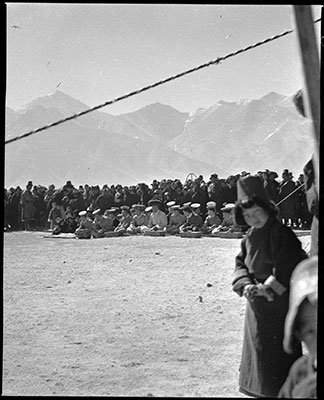 Crowd of spectators in the grounds of Trapshi (gra phyi rtsis bsher) near Lhasa. The group of people sitting down in the background are wearing ceremonial dress and their hats indicate that they are junior government officials belonging to artistocratic families. The guide rope from the tent in which the photographer is sitting can be seen running diagonally across the top of the image. A young boy wearing a coat and fur-lined hat peers into the camera.

Manual Catalogues - Richardson's hand list: Negative album No.1 'New Year Ceremonies at Lhasa' [nos. 1 -16] ' The Grwa bzhi (or Phyi) bsher [typed and] 'Rtsis bsher' handwritten in Richardson's hand. "This is a review of the rta-dmag , the old feudal cavalry of whom each noble family had to provide a detachment. It takes place on the sandy plain near the army barracks at Grwa-bzhi on the 23rd of the Tibetan 1st month.
No. 1 shows part of the ground and a body of junior officials sitting at the parade ground before the ceremony. The Kashag, (Cabinet) attend and sit in a tent facing the ground. [KC 8/7/2006]

Other Information - Setting: Trapshi is a military camp just outside Lhasa. The group of people sitting on the ground are junior government officials. They are wearing hats known as Bokto ( 'bog to ) worn by the sons of aristocratic families when they are first commissioned into government office. In 'Tibet Past & Present', [Oxford: Clarendon Press, 1924, p.?] Sir Charles Bell states that Trapshi Tsisher means "The Review (Inspection) at Trapshi". The annual ceremony of Trapshi Tsisher takes place on the 23rd day of the 1st Tibetan month, usually in February in the Roman calendar. The origin of the ceremony is unknown. [TS 10/1/2005]