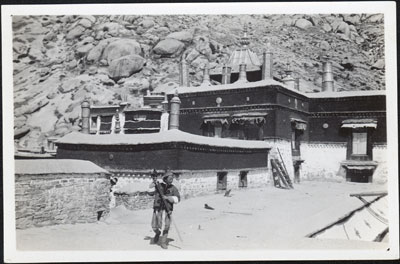 Sikkimese servant of the British Mission on the roof of Sera Monastery carrying a tripod.

Research publication - Clare Harris and Tsering Shakya (eds.) 'Seeing Lhasa: British Depictions of the Tibetan Capital 1936-1947' Chicago: Serindia Publications, 2003, p. 126. It has been incorrectly identified in the publication as being of Drepung Monastery and the photographer as being Frederick Spencer Chapman [MS 10/04/2006]