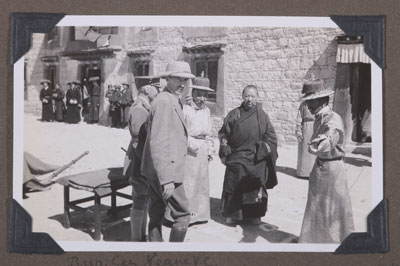 Members of the British Mission staff and Tibetan officials, including Yapshi Langdun (the Prime Minister), the Chikyak Khenpo and Norbhu Dhondup, gathered at Trapshi barracks on the occasion of an official review of Tibetan troops. Other Tibetan officials and their servants are seen in the background outside the barracks

Biographical Information - From left to right Colonel Philip Neame, Hugh Richardson, the Tibetan Prime Minister (Yabshi Langdün), a monk official and Norbhu Dhondup (Tibetan advisor to the Mission) in a monastic courtyard in Lhasa. Richardson had served as British Trade Agent at Yatung but joined the 1936 Gould Mission to Lhasa and served as representative of the British Government when Gould left. Colonel Neame’s role in the 1936 Mission was to assess the military capabilities of the Tibetans. Though his report on the Tibetan army was scathing, he spent a great deal of time in Lhasa discussing potential improvements with Tibetan officials. The British also courted the attention of the Tibetan PrimeMinister (Yabshi Langdün) who was a nephew of the 13th Dalai Lama. [CH 2003]

Biographical Information - Hugh Richardson dedicated much of his career to diplomacy and scholarship in Tibet and spent a total of eight years in the country (1936-1940 and 1947-1950). In 1936 he was British Trade Agent in Gyantse and then joined the Lhasa Mission serving under Gould. In 1937 he remained in Lhasa when the rest of the Mission left. He is said to have spoken “impeccable Lhasa Tibetan with a slight Oxford accent” (Shakabpa 2001). In 1944 he was awarded the OBE for his work for the Indian Civil Service but in 1950 he began a second career as a scholar writing many books on aspects of Tibetan history and culture. When he died in Scotland in 2000, butter lamps were lit in the Jo khang in Lhasa in his honour. [CH 2003]