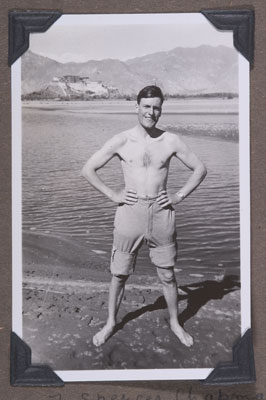 Frederick Spencer Chapman with rolled up trousers standing in by the Kyichu with the Potala in the background. On this day, a Sunday and therefore a day off for the Mission staff, he and a number of others crossed the Kyichu at the ferry crossing to visit a ruined fort some miles out of Lhasa. This photograph is paired with that of a similar image taken by Chapman of Evan Nepean [2001.35.211.1]

Other Information - Cultural Background: Frederick Spencer Chapman standing in the Kyi Chu river with the Potala Palace in the background. This is one of the least formal shots taken during the 1936 British Mission to Lhasa. Taking a break from their duties, Spencer Chapman and Evan Nepean went swimming in the Kyi Chu river (which flows along the outskirts of Lhasa). They then photographed one another on the river bank with their shirts off. Spencer Chapman often walked in the countryside around Lhasa bird-spotting, collecting botanical specimens and taking photographs [CH 2003]