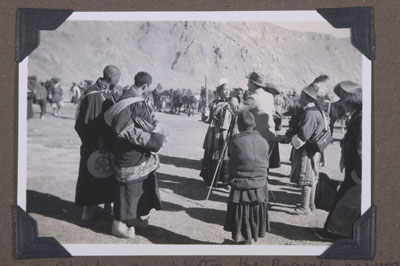 Frederick Spencer Chapman, in the centre of the image, takes a photograph of an official at the ceremony to mark the return of the Reting Rinpoche to Lhasa. A Sikkimese orderly holds his camera case while a crowd of monks and other onlookers gather

Other Information - Cultural Background: Spencer Chapman spent much of his time in Lhasa recording ceremonial events and processions such as this one when Reting Rinpoche, the Regent of Tibet returned to Lhasa from a tax collecting trip. Spencer Chapman noted that “Gould … and Norbhu took their places in the procession while Nepean and I accompanied them to take photographs. We took several clerks and half-a-dozen scarlet-coated retainers to compete with the Chinese who would also be there. In the eyes of the Tibetans these things are of considerable importance: an official has many servants and wears as sumptuous clothes as his rank and means will allow”. (1938:217) Clearly the presence of British photographers setting up their cameras and tripods drew quite a crowd of Tibetan onlookers. [CH 2003]