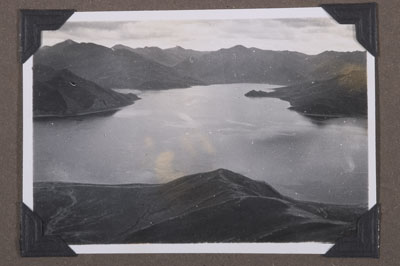 View of the Yamdrok Tso taken in September 1936

Other Information - Dates: The main Mission party travelling to Lhasa with Sir Basil Gould arrived at Gyantse on August 12th 1936. Most of the party left on August 16th but Nepean had to remain in Gyantse to fix the wireless set that was a critical part of the communications network that the Mission hoped to establish in Lhasa. This photograph, therefore, could have been taken between August 12th and early September when Nepean left to travel to Lhasa, arriving on September 6th 1936. However, Yamdrok was about 3 days journey from Lhasa, although Nepean would have been able to travel faster as part of a smaller group. This photograph, therefore, was probably taken on or around September 3rd 1936 [MS 28/07/2006]