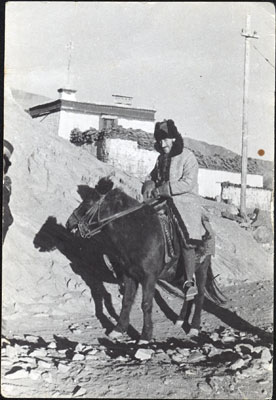 Evan Nepean riding a horse wearing his Afghan coat and fur hat in front of a building in Nakartse. Nepean had been recalled to India and Frederick Spencer Chapman accompanied him as far as Nagartse

Manual Catalogues - Caption in Chapman's hand-written list of negatives made whilst on the Mission to Lhasa, 1936-7 [See PRM Manuscripts Collection]: 'Nepean at Nangartse. Vert [Vertical]' [MS 14/08/2006]

Other Information - Related Images: Images prefixed with 'BD' taken on the British Mission to Lhasa in 1936 - 37 comprise a group of negatives containing images of Jangme village, Chaksam and ferry, Nepean and Sona Mundhu, Nangartse, animals and birds, Karo La, yaks descending pass. These images were taken in December 1936 when Chapman escorted Nepean, who was returning to India, to Nangartse, and then remained near Yamdrok Tso to take photographs of the flora and fauna [MS 14/08/2006]