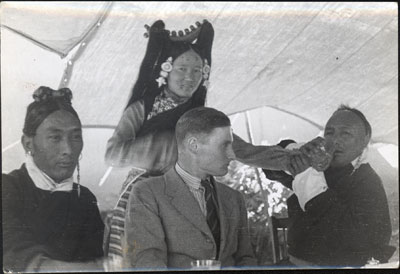 Sidney Dagg, a wireless operator on the British Mission to Lhasa 1936-7, sitting between Rupon [right] and another Tibetan man during a lunch party held at the Dekyi Lingka residence for 4th and 5th ranking Tibetan officials. Behind Dagg is a 'Chang girl' wearing an elaborate head-dress and jewellery. Rupon is holding her arm and is drinking from the glass she has offered him

Manual Catalogues - Caption in Chapman's hand-written list of negatives made whilst on the Mission to Lhasa, 1936-7 [See PRM Manuscripts Collection]: 'Dagg at lunch party' [MS 08/08/2006]

Other Information - Cultural Background: The Tibetan man being encouraged to drink chang (barley beer) is Rupon, referred to by the Mission members as the “singing monk”. On these occasions female servants would fill a glass with beer and hand it to the guest, if he puts it down she repeats the invitation; if he only drinks a little she is still not satisfied and returns it to him refilled. “Before moving on to the next victim she refills his glass. In obstinate cases she is permitted to nudge his arm and use any form of coercion.” (Spencer Chapman 1938:110) This photograph is inscribed by Nepean on the reverse with the phrase “Tunda nang-ro-nang” (please drink, drink). The consumption of chang seems to have helped the British to learn some Tibetan.
[CH 2003; modified MS 08/08/2006]

Other Information - Setting: Mission Diary for October 3rd: "Today we gave the last of our big lunch parties. The guests were officials below the fourth rank. They were as easy to entertain as all our earlier guests and it was an enjoyable afternoon but we were all relieved to see the end of a week of parties" ['Lhasa Mission, 1936: Diary of Events', Part VII p. 2, written by Hugh Richardson]. See Bodleian Library Hugh Richardson Archive MS. Or. Richardson 3 folio 42 for a fuller description of this event.[MS 08/08/2006]