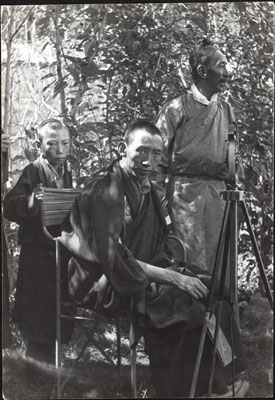 The Regent of Tibet, Reting Rinpoche, seated behind a microphone with Rai Bahadur Norbhu Dhondup standing to his right. A young monk stands behind holding the Regent's chair

Manual Catalogues - Caption in Chapman's hand-written list of negatives made whilst on the Mission to Lhasa, 1936-7 [See PRM Manuscripts Collection]: 'Regent and Norbhu by microphone' [MS 01/04/2006]

Other Information - Description: The Regent of Tibet, Reting Rinpoche, seated at a microphone with Norbhu Dhondhup (far right). For this occasion Nepean and Dagg set up a public-address amplifier in the Regent’s garden. “The microphone was set up in one corner of the garden and the amplifiers near the house. Norbhu and Tsarong then carried on a mock quarrel in front of the microphone, and the Regent, sitting in his room, could hear every word. This simply delighted him and he was as excited as a schoolboy. Then some gramophone records were played. Nothing but the loudest possible noise would satisfy the Regent, who made us play record after record at full blast. After this he went over and spoke into the microphone himself, at first rather self-consciously, but gradually finding great amusement at the sound of his own words and laughter booming back at him” Spencer Chapman ['Lhasa: The Holy City', F. Spencer Chapman, London: Chatto & Windus, 1938, p.113] [CH 2003]