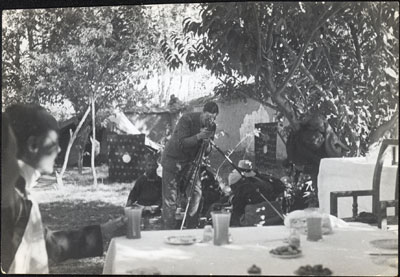 At a party for 4th and 5th rank officials in the Mission gardens at the Dekyi Lingka. Frederick Spencer Chapman peers into his camera which is supported on a tripod, taking photographs of the guests. Behind him, a group is seated on the ground; in the foreground is a table laid with food and drink. A Tibetan official is seated at the table in the extreme left of frame, out of focus

Other Information - Setting: Mission Diary for October 3rd: "Today we gave the last of our big lunch parties. The guests were officials below the fourth rank. They were as easy to entertain as all our earlier guests and it was an enjoyable afternoon but we were all relieved to see the end of a week of parties" ['Lhasa Mission, 1936: Diary of Events', Part VII p. 2, written by Hugh Richardson]. See Bodleian Library Hugh Richardson Archive MS. Or. Richardson 3 folio 42 for a fuller description of this event.[MS 08/08/2006]

Other Information - Photographer: Frederick Spencer Chapman worked with multiple cameras at once. The reference 'CY' for this image indicates that this image was taken using one of Spencer's cameras. Evan Nepean frequently worked alongside Chapman taking photographs, although more typically Nepean operated a cine camera. It is not certain, therefore, who took this photograph [MS 08/08/2006]