Tsarong and his wife outside their house 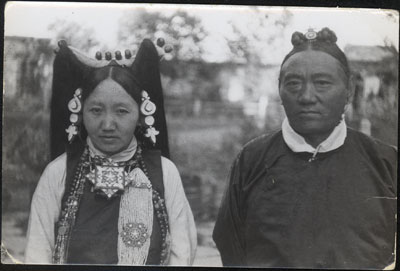 Tsarong and his wife outside their house on the occasion of hosting a farewell lunch for Brigadier Neame, who was due to leave Lhasa on this day

Biographical Information - Dasang Damdul Tsarong was a favourite of the 13th Dalai Lama, a military man and later a shappe (cabinet minister in the Tibetan government) until he was removed from office as a result of his modernising policies. He was a great friend of the British Mission frequently inviting them to his house and accompanying them on their various visits around Lhasa. He was considered by the mission to be a great character, as Gould recalled “Once, after a long and festive party at the De Kyi Lingka, he fell asleep in my arms murmuring, “Great minister, I love you, I love you”. At breakfast next morning he had his usual bright eye and was quite unperturbed. He spoke a little English. To him it seemed strange that anybody in India should not welcome British rule”. (1957:236) He had four wives (Including Rigzin Choden, Pema Dolkar, Rinchen Dolma (later Mary Taring) and Tseten Dolkar) and ten children. Although he was in India in 1956 he insisted on going back to Tibet to help the Dalai Lama to escape into exile. He was captured by the Chinese and in 1959 died mysteriously the night before what was due to be his public humiliation. [CH 2003]

Other Information - Cultural Background: Tsarong is shown wearing the dress of a high official at the New Year ceremony in 1936. The chuba (gown) is made from silk brocade with Chinese-style dragon motifs. His gold, turquoise and coral ‘sog byil’ (ear-ring) indicates that Tsarong was a high-ranking layman of the Tibetan government. A strict dress code applied at ceremonial occasions such as this and Tibetans were told what to wear depending on their status. Born into a peasant family, Nangang, took the name Dasang Damdul Tsarong when he married into an aristocratic family. He was a favourite of the 13th Dalai Lama and served both as a military leader and a member of the Tibetan government. [CH 2003]

Other Information - Photographer: It has been possible to identify this image as having been taken by Philip Neame by cross-referencing this image with the Neame Collection, which contains the original negative for this image, on temporary loan to the Pitt Rivers Museum, Oxford [MS 15/08/2006]