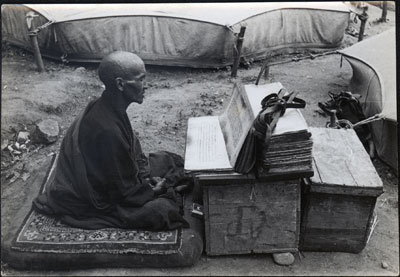 Manual Catalogues - Caption in Chapman's hand-written list of negatives made whilst on the Mission to Lhasa, 1936-7 [See PRM Manuscripts Collection]: 'Professional prayer outside tents' [MS 14/08/2006]

Other Information - Related Images: Images prefixed with 'CS.' taken on the British Mission to Lhasa 1936-37 comprise a group of negatives containing images of patients from Dr Morgan’s hospital, Mir Khan, curio sellers, bookshops, street scenes, Jokhang, willows and Chapman. They seem to have been taken on or around September 3rd 1936 [MS 14/08/2006]