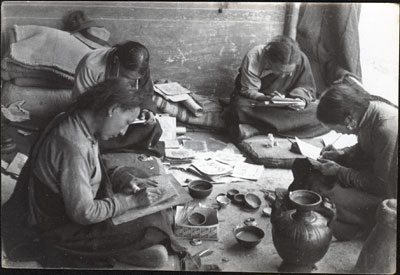 A group of artists seated on the floor painting Christmas cards for Mission members.

Other Information - Setting: A group of Tibetan artists seated on the floor painting Christmas cards for the 1936 Gould Mission. The cards were to be sent to British and Tibetan friends and colleagues as the majority of British Mission members stayed in Lhasa for Christmas and both British and Tibetan New Year. Gould instructed that a Christmas party should be held for Tibetan children at the Dekyi Lingka. The Mission house was decorated with a Christmas tree and Norbhu Dhondup was disguised as Santa Claus. The party was a great success and the children reportedly requested that Christmas would become an annual event in Lhasa. [CH 2003]