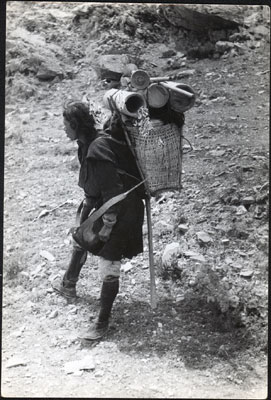 Manual Catalogues - Caption in Chapman's hand-written list of negatives made whilst on the Mission to Lhasa, 1936-7 [See PRM Manuscripts Collection]: 'Man with load of chang pots v. badly scratched' [MS 14/08/2006]

Other Information - Related Images: Images prefixed by 'CP' taken on the Mission to Lhasa in 1936 - 37 comprise a group of negatives containing images of the route to Lhasa including rock paintings, a ‘ghost scarer’, environs of Nyapsu La, Singma, boats on the Tsangpo, birds and flowers. The list is referred to as ‘P’ in Chapman’s papers, but all the images were prefixed ‘CP’ in the draft album and related prints in the Pitt Rivers Museum collection are also annotated as ‘CP’. They all seem to have been taken between August 19th - 22nd 1936 [MS 14/08/2006]