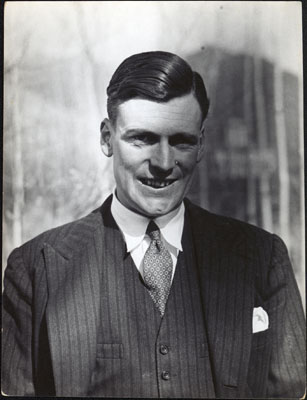 Frederick Spencer Chapman in suit, shirt and tie. This photograph was taken on December 24th 1936, when Chapman went to photograph a special ceremony at the Jokhang cathedral in Lhasa [see text of Lhasa Mission for details]

Manual Catalogues - Caption in Chapman's hand-written list of negatives made whilst on the Mission to Lhasa, 1936-7 [See PRM Manuscripts Collection]: 'Self [Chapman] head and shoulders' [MS 14/08/2006]

Other Information - Related Images: The quarter-plate images prefixed 'C.20.' comprise a group of negatives containing images of the Jokhang, Norbu Lingka, including interiors. The group of negatives is titled ‘Function at Cathedral’ by Chapman in his handlist of photographs, but this only seems to extend to the first 6 images out of 14, which were all taken on December 24th 1936 [MS 14/08/2006]