Mission staff about to cross the Kyichu river 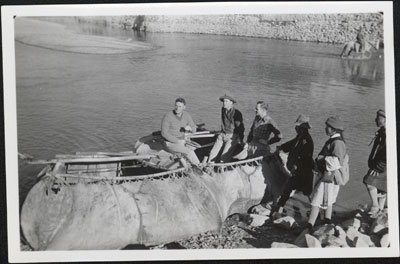 Left to right: Dr Morgan, Frederick Spencer Chapman, Lt. Dagg seated in a hide skin boat waiting to cross the Kyichu river, whilst servants and orderlies to the Mission stand alongside. A man on horseback can be seen in the background. There were many such ferries across the Kyichu river, but this was probably the one that operated on the river close to the Dekyi Lingka, where the Mission party stayed in Lhasa. Sunday was usually a day off and some of the Mission liked to go around the Lhasa valley on these days to relax