The Mission en route to Lhasa 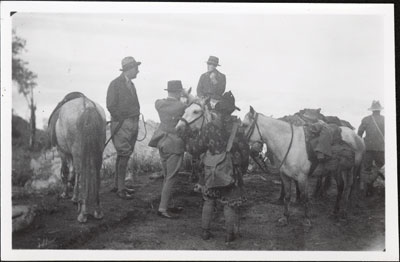 Four members of the British Mission with a syce or groom/attendant and horses. Sir Basil Gould is standing on the left, Chapman is seated upon his horse. This image was probably taken close to Gangtok at the beginning of the Mission's journey to Lhasa

Other Information - Dates: This image was probably taken close to Gangtok at the beginning of the Mission's journey to Lhasa. The Mission departed from Gangtok on July 31st 1936 and arrived in Karponang on the same day. [MS 23/03/2006]

Other Information - Related Images: The negative for this image is in the Frederick Spencer Chapman collection at the PRM. 'YN 3' has been scratched into the bottom left hand corner of the negative [MS 23/03/2006]