Beggars in Ragyapa quarter of Lhasa 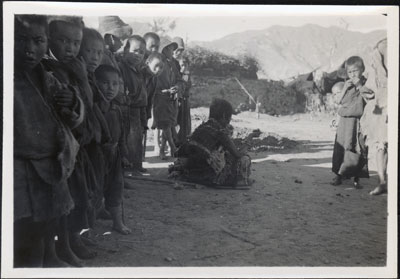 A beggar in the centre of the image, flanked by a crowd of child onlookers. This photograph according to Nepean was taken in the quarter of Lhasa occupied by 'body cutters' or Ragyapa whose responsibility it was to dispose ritually of the bodies of the deceased

Other Information - Related Images: Caption for this image in Nepean's album (see Same Image As) - 'Beggars in the body cutters quarters'. [MS 30/07/2006]