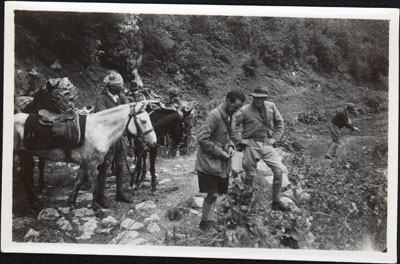 Frederick Spencer Chapman and Martin, a school master from the new Public School in Dehra Dun stopping on the track above Lingmathang. Mr Martin was part of a group of teachers who had been on a walking tour to Gyantse

Other Information - Related Images: Caption for this image in Nepean's album (see Same Image As) - 'F. Chapman and Martin at Lingma Thang'.[MS 28/07/2006]

Biographical Information - Martin was a school master from the new Public School in Dehra Dun. [KC 24/07/2006]