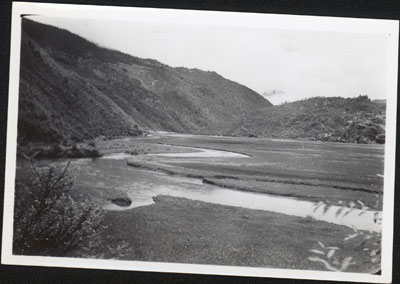 Lingmathang is situated in the Chumbi Valley close to Gautsa. The river can be seen zig-zagging along the valley with hills on its left and a flat plain on its right. Some foliage can be seen in the lower foreground

Other Information - Description: Brigadier Neame described the Lingmathang plain in the official diary of the British Mission to Lhasa 1936-37 on 4th August 1936: "After an hour and a half's march alongside a raging cataract of a stream and up a gorge bounded by precipitous jungle and scrub covered hills rising to bare rock peaks, we passed a spur nearly blocking the valley and came to the remarkable plain of Lingma Thang, a couple of miles long and half a mile broad absolutely level where the stream meandered gently, having the aspect of a perfect dry fly trout stream. But alas only small local snow trout live here, and they would not look at Gould's fly" [Sir Basil Gould, head of the Mission and Political Officer in Sikkim attempted to fish at this point]. [MS 12/8/2005]