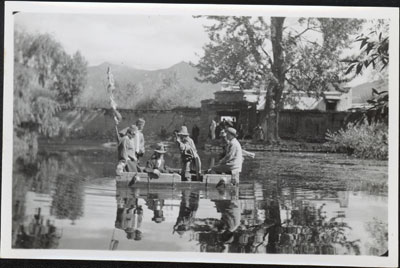 The Snake Temple, or Lukhang, north of the Potala. Some men in a boat can be seen approaching the temple, outside of which the photographer is standing. Other people can be seen crowded in the entrance to the temple compound

Other Information - Related Images: Caption for this image in Nepean's album (see Same Image As) - '1Members of the party crossing moat to the snake temple'. [MS 30/07/2006]