An altar in Kesar Lakhang? 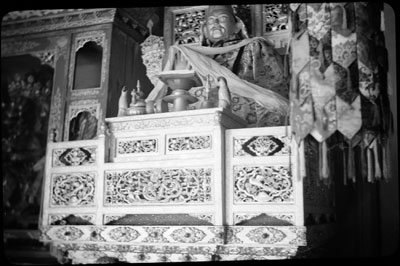 An altar possibly in Kesar Lakhang near Kundeling in Lhasa showing an image of Tsongkhapa? seated on elaborately ornamented throne and with textile emblems hanging from the ceiling. The page in Nepean's album on which this image appears [see Same Image As] is head 'Chinese Temple Near Lhasa' suggesting that it is the Kesar Lakhang to which Nepean is referring