Seated aristocratic women with children at their feet 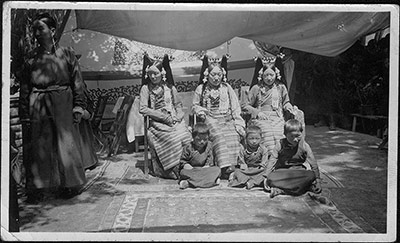 Three female members of the Lhasa aristocracy seated on chairs with three young children sitting cross-legged at their feet. The women's hair is dressed in the Lhasa style and they are wearing jewelry and hair ornaments. A male senior official can be seen on the far left of the image. A carpet is laid on the ground and the women and children are sitting under an awning. There is an appliquéd tent in the background. This photograph may have been taken at the British Mission, Dekyi Lingka, garden.

Notes on print/mount - "Velox" is printed in black ink on the back of the print as is the number 619, in red. "Tibetan glamour girls" is written in black ink in Staunton's hand and the same in capital letters in black biro. [KC 7/11/2005]

Research publication - This image is reproduced in Clare Harris and Tsering Shakya, 2003 Seeing Lhasa , Chigago, Serindia, p. 63. The caption reads, "Three female members of the Lhasa aristocracy seated on chairs with their young children sitting crosslegged at their feet. The caption written by Staunton on the reverse reads: 'Tibetan Glamour Girls.'"[KC 7/11/2005]

Other Information - People: According to T. the three women are (left - right): Chang-ngo-pa's daughter, Kapshoba's wife and Ramba Lhacham who married into the Ringang family. [KC 7/11/2005]