Monks with votive offering in the Potala eastern courtyard 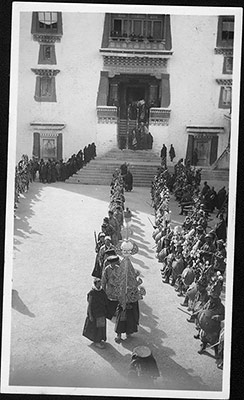 The eastern courtyard, Deyang shar, of the Potala palace. Two monks carrying a tall pyramidical votive offering, torma, with fretwork wings surmounted by a grinning skull mask with a spear and a small umbrella on top. They head a line of lay and monk officials moving forward and away from the the steps and triple staircase leading down from the white palace of the Potala. There are rows of traditional foot soldiery, zimchongpa, on the right. They are wearing chain-mail, steel helmets with large plumes or a pair of flags and they are armed with matchlocks, swords, bows and arrows and large round wicker work shields. This ceremony was part of the New Year celebrations possibly taking place on the 29th day of the 12th month. The votive offering of the twenty ninth day, Tse gutor.

Notes on print/mount - "Devils images to be cast away" is written in pencil on the reverse of the print. 511 is stamped on the back in black ink.

Other Information - Setting: Hugh Richardson ( Ceremonies of the Lhasa Year, 1993, London: Serindia Publications, p. 116) describes the setting for this photograph thus:"...the great eastern courtyard of the Potala, the Deyang Shar. It is entered by a long, steep, triple stair below which is a well-proportioned flight of stone steps. The wide central windows of the facade above are hung with bright valances; the uppermost, curtained with yellow silk, is that of the private room of the Dalai Lama from which he may watch the dances; the two below are for the Kashag and other senior officials respectively. On the north side of the courtyard a long canopy... shelters the padded seats for the monk orchestra. An open parapet above it provides a viewpoint for spectators as does a similar parapet to the south beneath which there are galleries for ladies and other distinguished persons. Towering over the east end is a massive three-storied building reached by a long stone stairway from the Sho. At one side is a balcony for lesser officials and the central windows are reserved for foreign visitors."

Other Information - Military: Hugh Richardson ( Ceremonies of the Lhasa Year, 1993, London: Serindia Publications, p. 116) describes the setting for this photograph thus: "Then they [traditional foot soldiers, zimchongpa ] have displayed their skill, at some length,with their differing weapons to the accompaniment of shrill trumpeting, battle cries, taunts and chanting, ending with a loud explosion of musketry, they sit in the courtyard to receive their reward of tea and meat, and then withdraw to the sides." There is more information about the traditional foot soldiers in ibid. p.49.