Procession of armed cavalry in the Barkhor Lhasa 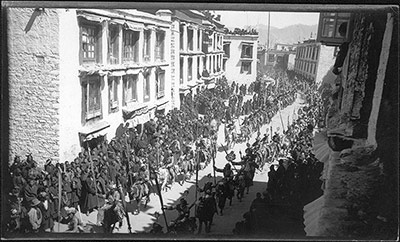 A procession of mounted horsemen in ancient armour proceeding along the Barkhor, Lhasa. They are wearing chain-mail, steel helmets with large plumes and they are variously armed with matchlocks, swords, bows and arrows. Some of them carry large round shields of strongly made wickerwork. This procession possibly took place on the 24th day of the first month and marked the formal end of the Great Prayer Festival, Monlam Chenmo. It is being viewed by crowds of mostly monks and lay people. Onlookers view the spectacle from the roofs of houses and from first and second floor windows of the houses lining the street. There is a tall prayer flag pole in the background.

Other Information - Setting: Hugh Richardson ( Ceremonies of the Lhasa Year, 1993, London: Serindia Publications, p. 44) describes the setting for this photograph thus: "When the road is clear it is the turn of the cavalry [to approach and prostrate in the direction of the Dalai Lama's window in the Jokhang] who have in the meantime circled the city, each wing by a different route, meeting at the south-east corner of the Barkor. ... The Yaso then lead their troops to the south-west corner of the Barkor where they dismount and walk with their attendants to the forecourt of the Jokhang where they prostrate themselves to the Dalai Lama after which they walk back, mount their horses and lead the cavalry slowly past the Jokhang and on round the Barkor to the south-east corner again." [KC 29/11/2005]