View of the Barkor with the Potala in the background 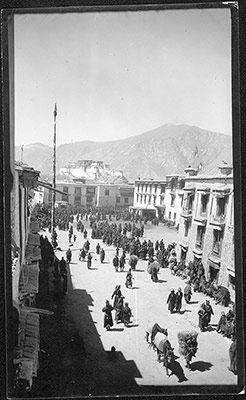 View of the Barkhor taken from a window on the third floor of a house. There is a crowd of monks standing in the centre of the image and Lhasa citizens walking along the street. In the foreground there is a man leading two horses and carrying a large bundle of fodder on his back. Further to the left is a group of two women and two girls with Lhasa headdresses. One of the women is carrying a child on her back. There are also two women carrying very large bundles of fodder. One of the buildings on the right has ritual roof decorations comprising branches with prayer flags attached to them. On the left there is a very tall prayer flag pole. The view of the Potala is from the south east.

Contemporary Publication - A similar image taken by Spencer Chapman is reproduced in Lhasa the Holy City (between pp.176 - 177) with the following caption: "A Lhasa street. Notice prayer-pole on left, and, in centre, incense burner and paving in front of Kashag building. Potala in background, and Holy Mountain (18,500 ft.) in distance". There is also a description of the square in front of the Kashag on p.155, "To the south of the cathedral is the main square, which is used as a market place. To the north of this square - and therefore built right against the Cathedral - is the Kashag, the meeting-place of the Tibetan Cabinet, from which its name is taken. Here also is the Government Treasury and other official buildings. For some distance in front of the Kashag the ground is set with square cobbles,and there is a large insense-burner. It is here that the Dalai Lama, or Regent,preaches a sermon to the people on the occasion of the Tibetan New Year." [KC 17/10/2005]

Other Information - Setting: According to T., the house directly below the Potala palace is the Doring house. The prayer flag pole on the left is Kelsang Darchen and is the pole outside the house of the 7th Dalai Lama's (Kelsang Gyatso) family. [KC 29/11/2005]