Procession of mounted senior aristocrats in the Barkhor 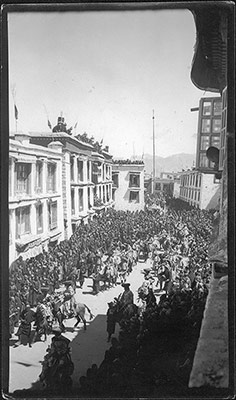 A procession of mounted senior aristocrats on horseback riding along the Barkhor and nearing the Jokhang or 'Cathedral' in central Lhasa. This procession takes place during the Great Prayer festival, Monlam Chenmo, during the first Tibetan month. Crowds of monks line the street and there are spectators in the windows and on the roofs of some of the houses. In the centre in the background an extremely tall prayer flag pole may be seen.

Research publication - A copy of this photograph is reproduced in Seeing Lhasa, ( Clare Harris and Tsering Shakya eds., 2003, Serindia publications, Chicago p. 33) with the following caption: "During New Year's ceremonies,the cavalry of the Yaso generals ride through the streets of Lhasa on horseback. They are members of the Trapchi regiment based on the outskirts of Lhasa. Staunton photographed them from the vantage point of a balcony above the crowds. [KC 17/10/2005]