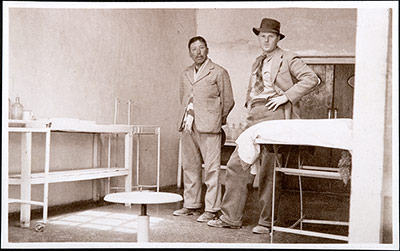 Harry Staunton in a suit and Homburg hat and Medical Assistant Rai Sahib Bo Tsering also in a suit with a striped scarf standing in a room of the British hospital in Gyantse. There is an examination bed on the right, a round stool in the foreground and a table with glass bottles against the wall on the left.

Notes on album mount - "Rai Sahib Bo in Gyantse Hosp" is written in small letters in pencil on the album page below the photograph. [KC 9/12/2005]