Carved relief of the Buddha at Red Idol Gorge 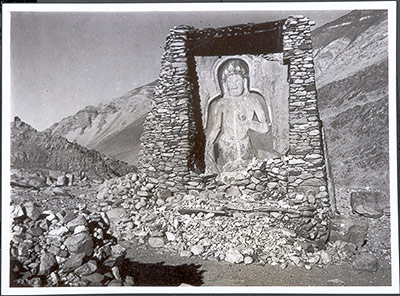 A road-side carved relief of Buddha in the earth-witnessing posture. It is found at the foot of a Gorge known as Red Idol Gorge.

Notes on the album mount - "Red Idol Gorge" is written in capital letters in pencil on the album page below the photograph. [KC 9/12/2005]

Other Information - Setting: F Spencer Chapman writes in Lhasa: The Holy City, 1940, London: Readers Union Ltd., p. 46 -7, "We had reached Red Idol Gorge, the sign of a battle in 1904 and certainly the most marvellous place for an ambush ... White quartz crystals have been heaped together by the pious , and there are Buddhas carved on the rocks and often protected from the weather by side walls and an overhanging lintel. ... At the foot of the gorge is a huge carved and painted Buddha about twenty feet high. In front of it is a pile of stones collected as an act of piety." [KC 9/12/2005]