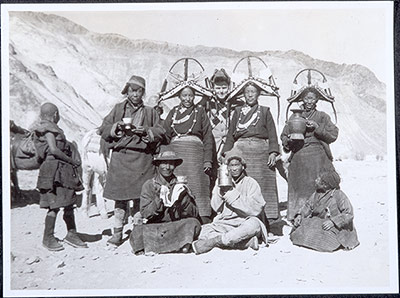 A group of Tibetan men and women formally bidding farewell to Staunton who is in the centre of the image at the back wearing a fur hat and his St. Bartholemew's scarf. The women standing all have Gyantse hooped headresses decorated with seed pearls and corals. The two standing on either side of Staunton have coral and amber necklaces and amulet boxes (ga'u) around their necks. The woman on the far right folding a vessel with a straight spout appears to be a servant. The two men seated on the ground are holding a tea cup and a tea pot as is the man standing at the back. There is also a woman seated at the front, a boy monk on the left and a couple of ponies behind.