Mountain trail leading up to the Jelap La pass 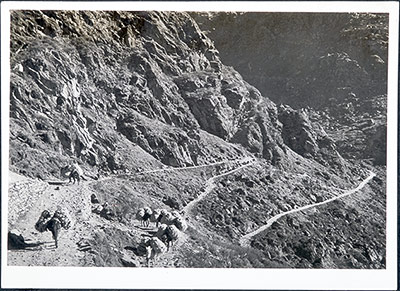 A rocky mountain trail leading up to the Jelap La pass with pack donkeys/mules carrying loads of wool.

Other Information - Setting: F Spencer Chapman writes in Lhasa: The Holy City , London: Readers Union Ltd, 1940, p. 15, "The main Lhasa-India trade route, together with the telegraph line, goes to Kalimpong in the extreme north of Bengal. This route crosses the southern ridge of the Himalaya by the Jelep La, a pass slightly higher and much more difficult than the Natu La, which descends directly to Gangtok. ... Thus it is that the bulk of the Tibetan trade, more especially the wool traffic, goes to Kalimpong, leaving the shorter Natu La track comparitively free."