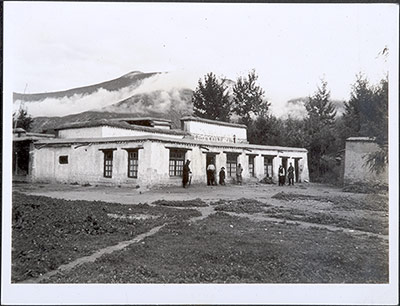 The one-storey Tibetan style building housing the new British hospital in Lhasa. There are several people standing in front of it. One of them is holding an umbrella. There is a grassy area in the foreground and hills and clouds in the background.

Notes on print/mount - "New Hospital completed Aug. 1940" written in capital letters in pencil in Staunton's hand beneath the photograph on the album mount. [KC 25/10/2005]

Contemporary Publication - Basil Gould writes: "Like their predecessors Doc Morgan and Dr. Bo, Harry Staunton and Dr. Tonyot were welcome in every home and many monks attended our little primitive hospital. One day in the course of an interview at the Great Temple, the Tibetan Cabinet asked whether we would like them to build us a hospital. Next day their young Officer of Works came along and saw the trace for a four-roomed single-story building which we had marked out on the ground. He paced out the trace and said it must be larger. Otherwise it would not be possible to work to standard dimensions and materials. So he paced out the ground-plan of the building as he thought it should be. That completed his work as an architect. Tibetans build houses as, not so long ago, seaworthy vessels were built at fishing ports in England. Within three and a half months the hospital was complete and full of patients." The Jewel in the Lotus , 1957, London: Chatto and Windus, p. 235. [KC 25/10/2005]

Research publication - Alex McKay writes, "Conditions [in Lhasa] were far from ideal for medical work, but a new hospital was built in Lhasa in the 1940s. This replaced the converted barn which Weir's Medical Officer had described as 'an "Aviary"...though why the sparrows should choose such dark and insanitary quarters I cannot imagine.' // The new hospital was designed by the British, but paid for by the Tibetans, whose attitude to Western medical practice had undergone a sea change since 1904. Originally there had been considerable opposition to Western medicine, particularly from monastic medical practitioners, who lost much of their custom, and hence fees. But the greater efficiency of modern science won over the general populace, not least because the British provided treatment free of charge. That was a deliberate strategy. In November 1904, Younghusband had observed that the Gyantse dispensary, 'is extremely desirable on political grounds' and this point was regularly made by the cadre in their reports on the Medical Officers'. // Modern medicine was a means by which the imperial power could gain goodwill among all social classes, and generate a positive attitude to modernity. It also became part of the struggle for influence in Tibet after China opened a hospital in Lhasa in 1944. Gould warned that 'Chinese competition in medical work calls for a high standard of work from us'." Tibet and the British Raj, 1997, Richmond: Curzon Press, p. 168. [KC 25/10/2005]