Tibetan workers at the British hospital, 1940 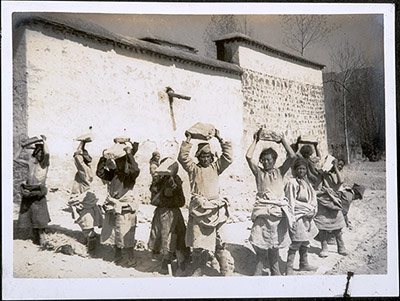 A group of Tibetans working on the new British hospital in Lhasa. They are all holding a large stone aloft and are possibly laying the foundations for the hospital. They have their outer clothes tied around their waist. The wall of a building is in the background.

Notes on print/mount - "Foundations" written in capital letters in pencil in Staunton's hand beneath the photograph on the album mount. [KC 25/10/2005]

Other Information - Description: Basil Gould writes: "Like their predecessors Doc Morgan and Dr. Bo, Harry Staunton and Dr. Tonyot were welcome in every home and many monks attended our little primitive hospital. One day in the course of an interview at the Great Temple, the Tibetan Cabinet asked whether we would like them to build us a hospital. Next day their young Officer of Works came along and saw the trace for a four-roomed single-story building which we had marked out on the ground. He paced out the trace and said it must be larger. Otherwise it would not be possible to work to standard dimensions and materials. So he paced out the ground-plan of the building as he thought it should be. That completed his work as an architect. Tibetans build houses as, not so long ago, seaworthy vessels were built at fishing ports in England. Within three and a half months the hospital was complete and full of patients." The Jewel in the Lotus , 1957, London: Chatto and Windus, p. 235. [KC 25/10/2005]