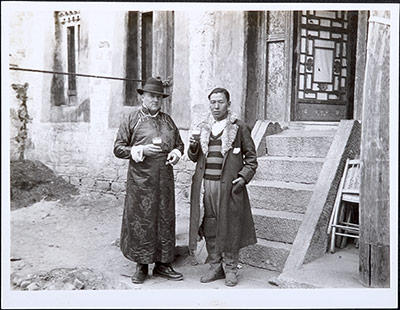 Reginald Fox and Rai Sahib Tonyot Tsering standing at the bottom of a short, steep flight of stone steps holding glasses of beer. Reginald Fox is smoking a cigarette and wearing a silk Tibetan coat (chuba) and Homburg hat. Rai Sahib Tonyot Tsering is wearing Tibetan boots, an overcoat with a fur collar and other western clothes. There is a folded chair on the far right of the image.

Notes on album mount - "Foxy Tonyot" is written in pencil in capital letters below the photograph on the album page. [KC 30/12/2005]