Harry Staunton on the roof of the Potala 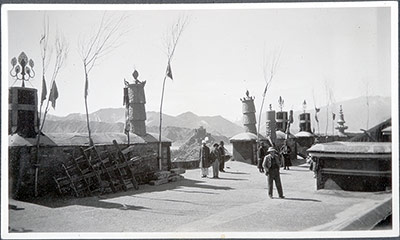 The Potala roof with Chakpori and mountains in the background. There are typical roof decorations, drum-like structures with tridents and branches with prayer flags, situated on the roof. Also, there are a number of men standing on the roof including Staunton in the topee hat on the right. In the centre, there are three men, two of whom are facing the camera. The one on the left is wearing a white turban on his head. The three other men visible are wearing Sikkimese orderlies clothes.

Notes on album mount - "POTALA ROOF". This is written in pencil in Staunton's hand below the mounted photograph on the album page.

Other Information - Setting: This photograph may have been taken at the time of the 14th Dalai Lama's Installation. [KC 6/12/2005]