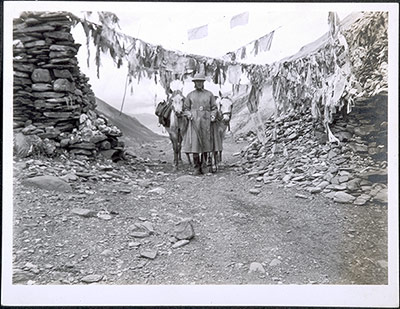 Harry Staunton standing at the Karo La pass with two ponies which have saddlebags attached to them. There are stone cairns either side of him and strings of prayer flags above him. He is wearing a mackintosh coat and a topee hat; he is holding a riding whip and has a cigarette in one hand.

Notes on album mount - "KARO-LAR PASS 17,400". This is written in pencil in Staunton's hand below the mounted photograph on the album page.

Other Information - Setting: The tops of passes in Tibet are marked by stone cairns made up of stones placed there and by suspended prayer flags placed around them by travellers as a sign of thanksgiving for reaching the pass. [KC 6/12/2005]