Zimchongpa warriors processing along the Barkhor 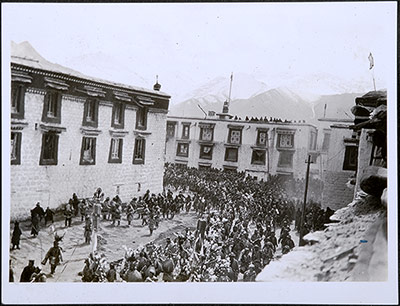 Zimchongpa warriors dressed in ancient armour processing around the south west corner of the Jokhang along the Barkhor on the occasion of the Monlam Torgya ceremony. This photograph is probably taken from the roof of the Doring house.

Other Information - Setting: Hugh Richardson writes about the ceremony of Monlam Torgya in Ceremonies of the Lhasa Year , 1993, London: Serindia Publications, pp. 39-51. "The ceremony of te Monlam Torgya is the longest and the most spectacular of the New Year celebrations. It is the high point of the Yaso's tenure of office and the day for which the Tsisher was the preparation. It brings together religious and secular elements and marks the formal end of the Monlam Chenmo. ... The centre of the activity is the forecourt of the Jokhang where it can be seen by the Dalai Lama from a window curtained with yellow silk in the Zurchong room to the north of the court. The Kashag watch from the verandah of the reception room, the Khamsum Tsomchen, over the porch of the Jokhang." As for the arrival of the Zimchongpa Richardson writes, "Then an outburst of explosions and war cries announces the arrival of the Zimchongpa at the south-west corner of the Tsuklakhang where they wait while their leaders accompanied by the City Magistratesand their standars-bearers go forward to prostrate themselves towards the Dalai Lama. Then the Zimchongpa march noisily up to the forecourt of the Jokhang. Some line the Barkhor while others form up in two files in the centre of the road. They take it in turn to display their martial prowess, singing war songs about Penden Lhamo as they do so." (pp. 40-1)