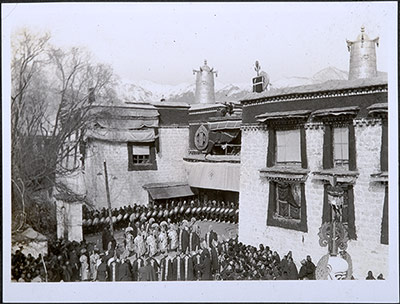 Monks of the Namgye Tratsang performing an exorcism ceremony in the courtyard of the main entrance to the Jokhang temple during the ceremony of the Monlam Torgyap. The monks standing up against the wall are playing hand-held drums. In the lower right-hand corner of the photograph the skull head of the votive offering (torma) can be seen being carried away. his photograph is probably taken from the Doring house on the Barkhor.

Other Information - Setting: Hugh Richardson writes about the ceremony of Monlam Torgya in Ceremonies of the Lhasa Year , 1993, London: Serindia Publications, pp. 39-51. "The ceremony of te Monlam Torgya is the longest and the most spectacular of the New Year celebrations. It is the high point of the Yaso's tenure of office and the day for which the Tsisher was the preparation. It brings together religious and secular elements and marks the formal end of the Monlam Chenmo. ... The centre of the activity is the forecourt of the Jokhang where it can be seen by the Dalai Lama from a window curtained with yellow silk in the Zurchong room to the north of the court. The Kashag watch from the verandah of the reception room, the Khamsum Tsomchen, over the porch of the Jokhang." As for exorcism ceremony performed by the Namgye Tratsang monks Richardson writes: "A small party of monks wearing brightly coloured brocade shawls ... come into the courtyard. Eight, carrying silver censers and two with silverritual vewssels, form two ranks facing each other. Their leader the officiating priest, performs a hieratic dance between and around their ranks chanting a prayer of exorcism and gesturing solemnly with his bell and dorje while the monks around the court keep up a rhythmic accompaniment with drums and cymbals." (p. 46)