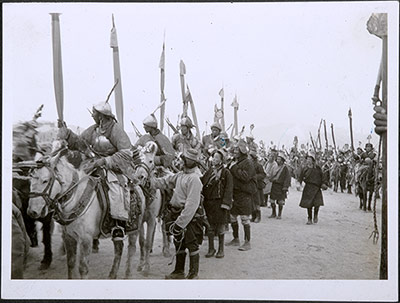 Other Information - Cultural Background: Hugh Richardson has written about this event in Ceremonies of the Lhasa Year , 1993, London: Serindia Publications, "Early in the morning the cavalry assemble at Lubu for the Trapchi Tsisher. It is the duty of the leading noble families, headed by the four Depon, to provide detachments of a fixed number of armed mounted men. They wear chain-mail, much of it mere remnants, steel brass plates, steel helmets with brocade lappets and peacock plumes, heavy cloth trousers decorated with blue devices, and special boots. Each has a flintlock gun or a modern rifle, a lance and a quiver of five plumed arrows. Formerly the ponies would have worn armour but only some pieces of that equipment survive in a few of the noble houses and it is no longer used. (p.34) The rest of the proceedings are described in pp. 34-7. [KC 13/1/2006]