Group of young monks in the countryside 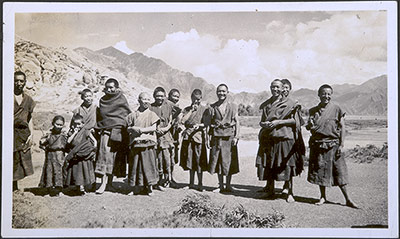 A group of young monks, two of whom are as young as five or six. They are wearing rather tattered robes and are all barefoot. They are outside in the countryside.

Notes on print/mount - "Trapa Lamas" is written in capital letters in pencil below the photograph on the album mount. [KC 6/1/2006]

Other Information - Cultural Background: In the caption to this photograph "Trapa" could just be intented to mean drawa - the lowliest of monks. The term lama is meant for monks who are lineage or incarnate monks. The monks in this photograph do no look as if they are. [KC 6/1/2006]