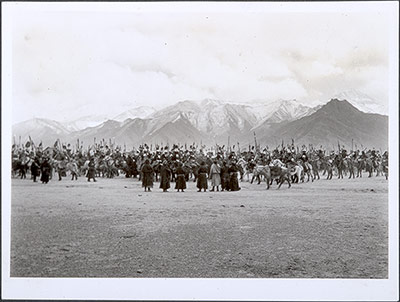 View of some of the 500-strong Zimchongpa warrriors mounted on horses and wearing ancient armour including chainmail, helmets decorated with ornate plumes at the Trapshi Tsisher review which took place on the twenty-third day of the first Tibetan month at Trapshi. There are snow-covered mountains in the background.

Notes on album mount - "Review at Trapshi" is written in capital letters in pencil as a joint caption for this phhotograph and 1999.23.1.28.1