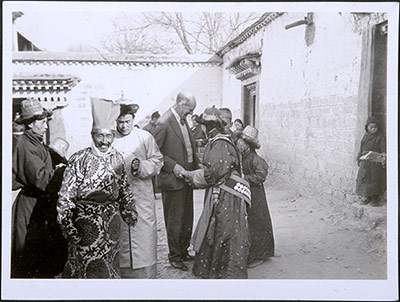 Basil Gould (centre) bidding farewell to the Dalai Lama's mother, Sonam Tsomo also known as Gyayum Chenmo, (he is holding her hand) and her family at the children's party in a courtyard of the Dekyi Linka. The Dalai Lama's father, Choekyong Tsering also known as Gyayub Chenmo, wearing light-coloured robes is to the left to Basil Gould. Rai Bahadur Norbu Dhondup is also on the left wearing an ornately patterned robe and a paper hat.

Notes on album mount - "Children's party at British Mission" is written on the album page (p.27) as a general caption for all four photogrsaphs on that page. Also, "R.B., D.L.'s father, B.J., D.L.'s mother" is written underneath the photograph in pencil[KC 6/1/2006]