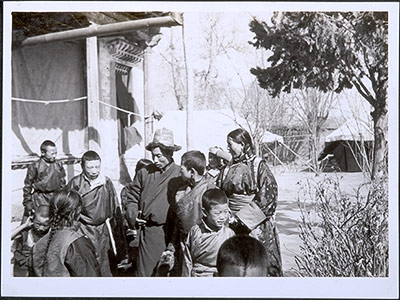 The Dalai Lama's mother and children at the Dekyi Lingka on the occasion of a children's party hosted by the British Mission. They are standing outside the house in the garden and there are tents in the background. The Dalai Lama's mother, Sonam Tsomo, known as Gyayum Chenmo (the Great Mother) is wearing a silk robe fashioned in the Amdo style. The children are from aristocratic families and are wearing silk robes.