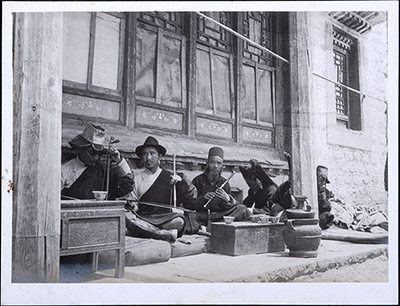 A group of three musicians seated on cushions. The two musicians on the left are playing piwang one-stringed bowed instruments and the musician on the right, a flute. The latter is Muslim. The musician on the left is wearing dark glasses and is probably blind. There are also two women with Lhasa head-dresses behind the pillar. Two low tables are placed in front of the musicians on which teacups are placed. There is also a large teapot on a brazier on the ground in front of one of the tables. The windows in the background do not appear to have glass but paper panels.