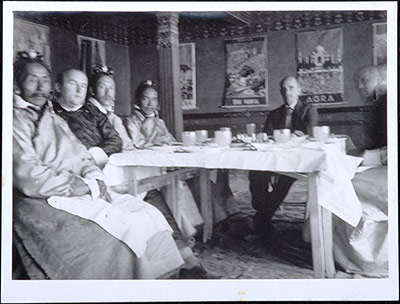 Monk and lay officials of the Tibetan cabinet being entertained at the British Mission by Basil Gould. The room is the reception room with painted pillars. There are posters of India on the walls. The table is spread with a tablecloth, glasses, plates and cutlery. Seated left to right are Rai Bahadur Norbu Dhondup, Reginald Fox, Sonam, unidentified lay official, Tenpa Jayan.

Notes on print/mount - "Kashar lunches" is written on the reverse of the print in blue ink. Also, "R.B., Foxy, Sonam, BJ are written below the photograph on the album page"[KC 3/1/2006]

Other Information - Setting: A description of Dekyi Lingka is provided by Margaret Williamson in Memoirs of a Political Officer's Wife , 1987, London: Wisdom Publications, "The house itself was a typical square, flat-roofed building of two storeys, built around a courtyard, with ancillary buildings including stables, kitchens and servants' quarters. ... on the gound floor ... there was ... a large dining-hall with many colourfully painted pillars. This room was large enough for receptions. ... (p. 96) [KC 3/1/2006]